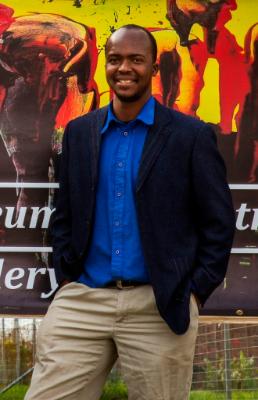 Mathias was born in Zimbabwe in 1985 and works as a full time artist currently based in Grahamstown, South Africa. He enjoys venturing into interesting small business ideas. He has two baby angels and a partner.Mathias has been donating paintings to Rhodes University from

2012 to fund-raise towards student scholarships through the Alumni & Post Graduate Offices at Rhodes University.

Mathias used to play professional cricket in Zimbabwe as a fast bowler but retired early in 2008 due to a back injury which refused to go away since 2002. Mathias went to Churchill Boys High School (a well known governement owned sporting school) with the likes of Tendai "The Beast" Mtawarira from 1999-2004. He came to Rhodes in 2007 and studied for a Bachelor of Fine Art degree and graduated in 2011. Mathias has been exhibiting professionally since 2009 as a Fine Artist and recently held a solo exhibition at the prestigious Cape Town Art Fair in February 2016.

As an artist born in a family of African spiritual culture, Mathias Chirombo's work is spiritually influenced by spirit medium-ship and customs. He seeks to explore this through dreams which are a rich source of inspiration for his art making, using spirituality and emotions to direct him in the search for meaning and guidance. The spirit world is identified as existing intangibly and only the effects it has on matter reflect its presence where it may be seen by some as of utmost importance.

Mathias has been Warden of Centenary House since January 2016.

If you have any questions, queries or comments, contact me as per details below.