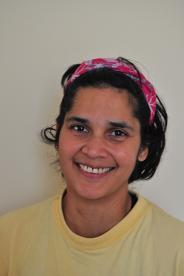 Mez Jiwaji has the privilege of being the House Warden of Victoria Mxenge House...again.

Mez wardened at Victoria Mxenge House between 2002 and 2007. After she completed her academic studies at Rhodes University in 2007, she and Drew (her partner) had some long long discussions. They both felt that some out-of-Grahamstown experience was necessary. Beatie, the Zimbabwean fox terrier, after much persuasion also agreed. So very reluctantly, they packed; Mez packed, Drew packed, Beatie packed. Admittedly, Beatie packed the least. They all headed off and spent some years exploring different pastures.

However, the call of Grahamstown was strong. Drew returned with Beatie mid-way through April in 2012. Later that year, and conveniently just in time for the holiday season and presents, Mez returned with the newest member of the family, Insiyah. And in April 2013, they were delighted to be offered the opportunity to Warden again. Mez. Drew, Insiyah and Beatie happily moved home to Victoria Mxenge House. Since then, the family has grown a little. B arrived in 2015…and has kept everyone on their tippy toes from the minute he arrived.

Mezhas a particular fondness for the following words that are attributed to Rabindranath Tagore.

‘I slept and dreamt that life was joy.

I awoke and saw that life was service.

I acted and behold, service was joy.’

In Victoria Mxenge House, the actions and sacrifices of our namesakes Lilian Ngoyi, Victoria Mxenge, Ruth First and Joe Slovo inspire us. The Freedom Charter speaks to us. Mez works with a group of intelligent, motivated, passionate and honest women to facilitate the functioning of the residence. In Victoria Mxenge House, we declare that ‘South Africa belongs to all who live in it’ and we work towards building a ‘truly African home for all in our Hall’; all our residents bring these words to life.

If you require any information about the residence or would like to visit, please use the details below.