Sorry there was an error sending your form.
Giving to RU
Rhodes>Lilian Ngoyi>Ruth First>Community Engagement

At the beginning of the year we helped in hosting a fun day with a man named ‘X’ who works with children in the township it took place in the botanical gardens where we bought drinks and sweets for the children and then we danced and sang together. 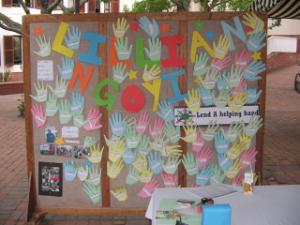 In the Rhodes community engagement week, getting involved in the Human chain and having our donation stall to raise the R800 where people could put hands on our board saying they had “lent a helping hand” in raising money for other projects throughout the year, i.e. for our Hall community garden (Lillian Ngoyi Hall) and we are in the process of donating the rest of the money to ROAR in support of giving aid to animals whose owners cannot afford to give them the proper vaccinations needed in order to fight disease or illnesses.

One of our great donation organisations is the Assumption centre run by nuns, every term we have a different food that we collect in Ruth First and then send to them which goes to children whose only meal a day is the one they get from the assumption centre, so far we have donated peanut butter and jam, samp and beans, and mealie meal. 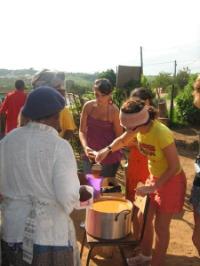 We have also helped Cynthia at Cynthia’s Soup Kitchen with making soup and dishing out as well as playing with the children. I have also been working closely with Sharc community, we helped in donating Easter eggs for their big Easter egg hunt in April this year, and we also donated a lot of clothes to them for their jumble sale on sat 3rd of October which was a huge success. In April, in connection with SHARC COMMUNITY we organized to watch an HIV/AID’s related movie called Philadelphia and we then have a discussion about the movie, it was very inspiring and it also brought out many issues that students have in terms of dealing with HIV/AIDS.

In May we held a big Beach Clean-up in Port Alfred, we arrived in the morning, had lunch and then took a few hours to walk around the beach with black plastic bags and picked up rubbish along the beach, it was great fun and also always good to keep the environment clean.

Our Big Project this year has been our Community Vegetable Garden. The Community Garden was started in February. We secured some sponsorship for tools, materials etc. and have established a 7m x 3 m veggie garden where we have started growing over 15 types of vegetables (tomatoes, beans, potatoes, ginger, onions, radish, celery, carrots, rocket, lettuce, herbs, beetroot, cabbage, cauliflower, broccoli, garlic, eggplant etc.). Our aim is to donate the produce to local schools/feeding schemes/soup kitchens etc. and to teach the recipients how to grow their own vegetable gardens. The vegetable garden is entirely organic and we’ve even managed to develop our own compost heap. We’ve been very fortunate to have AMAZING sponsorship and we’ve had several fundraising drives and the greatest effort for fundraising was achieved at the Pick n Pay Drive where we raised an incredible R2677!!!!!

All in all, we are sitting in pretty good shape for the rest of the year and next year, our goal is to make the garden sustainable, long term. The people we have taken to help so far is Margaret who runs ‘Home of Joy’ in the township, she looks after +/- 12 children who have been abandoned and abused and some of them are HIV positive, our second person is Cynthia who runs ‘Cynthia’s soup kitchen’ also in the township, where she feeds children and adults on Monday’s, Wednesday’s and Friday’s. We have helped both of the above mentioned places not only in giving them vegetables but also helping them plant or helping them fix already existing vegetable gardens, so far we have been very successful but as mentioned above we hope to carry out this project as a long-term sustainable development program. 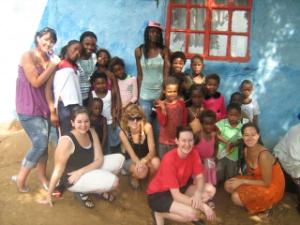 At the moment we are in the process of having three big collection drives one is for a project that needs a whole lot of empty chip and sweet packets as the lady collecting those makes wallets from them and part of the proceeds go to charity. The next collection is FINGO LIBRARY in collecting Xhosa book, childrens books or any novels the girls want to get rid of as well as books brought from home. As there is a serious shortage of books at Fingo library but the passion to read is there and the other collection drive is for Eluxolweni which is a Shelter in Grahamstown that operates primarily in the Human Rights (social reform and rehabilitation) Sector, because we have soup left over from the ‘striking’ in the dining hall and we are going to Eluxolweni to give them the soup left over and to get bread, we need to raise money for the bread so people are donating money for that.