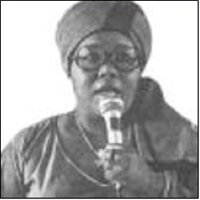 Victoria Mxenge was born in 1942 in King William’s Town, Eastern Cape. She trained as a nurse and midwife and worked in Umlazi Clinic near Durban. She then changed to law, and was eventually admitted as an attorney in 1981 after serving articles in her husband’s (Griffiths) legal firm.

After her husband’s banning, detention and subsequent murder, Victoria continued with thelegal practice. The death of her husband made her active in United Democratic Front (UDF) structures, becoming one of the more prominent members of the Natal Organisation of Women (NOW).

She spent many years fighting for the rights of people, representing youth and students who were detained by the security police and who were treated badly in detention. She was also part of the team that defended the United Democratic Front and the Natal Indian Congress during the treason trial in the Pietermaritzburg Supreme Court.

In 1985 she was brutally murdered before the trial and did not live to see the fruits of her efforts in putting evidence together in preparation the defence. Her death sent shock waves though the community and led to much criticism of the apartheid system. The international community, including the Reagan administration condemned the incident. Her funeral was attended by about 10 000 people, showing the prominent position she played in her community. Nelson Mandela and Oliver Tambo sent letters of condolence.

In 1987 a Durban magistrate refused to open a formal inquest into her death, claiming that she died from head injuries and had been murdered by persons unknown. Her killers were heard by the amnesty committee of the Truth and Reconciliation Commission (TRC), however the Mxenge family still feels that justice was not done.