Sorry there was an error sending your form.
Giving to RU
Rhodes>Lilian Ngoyi>Victoria Mxenge>Coat of Arms

Our coat of arms can be blazoned as follows:

‘Tiered in pale sable, gules and azure, a pairle vert fimbriated or to the chief and argent to the dexter and sinister, in chief, the scales of justice balanced on a sword per pale argent, sinister, a panther rampant or; dexter, an open book proper; on a chief argent two assegais per saltire surmounted by a Xhosa shield proper, between two escallops gules’. 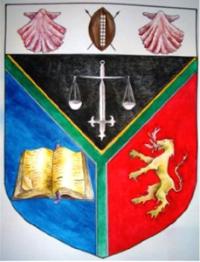 Has been taken from the Nelson Mandela Hall Shield. It represents the place of Victoria Mxenge within Mandela Hall.

The Xhosa Shield and Assegaai:

Represents strength and awareness, the readiness to battle for truth, symbolic of our African heritage;

Symbolise our links to Grahamstown.

The Shield itself is divided into three sections like the Nelson Mandela Hall Shield. The Nelson Mandela colours, like the colours of the South African flag, are symbolic of the new hope engendered by the flag in the new South Africa. They symbolise our commitment to the principles of freedom and democracy.

In the black section:

In the blue section:

In the red section:

A lioness. The female lion is known for her fierceness, her determination and her incredible courage while retaining a poignant tenderness. These are characteristics which the students of Victoria Mxenge House identify with.