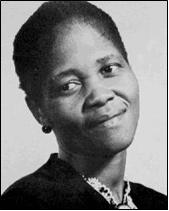 Lilian Masediba Ngoyi was born in Pretoria in 1911 to a Bapedi family of six children. She initially did teacher training at the Kilnerton Training Institution. When her father could no longer afford the fees, she began training as a nurse at City Deep mine hospital. Ultimately, she took employment in a garment factory between 1945 and 1956, where she joined and became active in the Garment Workers Union, under the leadership of Solly Sachs. In an effort to draw the attention of the apartheid regime to the unacceptable living conditions of workers, in 1952, she joined the ANC during the Defiance Campaign. She was arrested in the whites-only section of a Johannesburg post office while composing a telegram to then-Prime Minister DF Malan, which read:

Dr Malan will you please withdraw your bills. South Africa has been a peaceful country. If not, remember what happened to Hitler in Germany and Mussolini in Italy.

Within a year of joining the ANC she was elected president of the ANC Women’s League. When the Federation of South African Women was founded in 1954, she became one of its vice-presidents and was elected president in 1956. In 1954, she became treasurer of the South African Non-European Council of Trade Unions. A gifted public speaker, she travelled to Europe as a delegate to a Women’s International Democratic Federation conference in 1955, touring Russia, China and other Eastern Bloc countries. On her return, she became a member of the Transvaal ANC executive. She became the first ever woman elected to the ANC national executive in 1956. Her strength of leadership in these posts stemmed from her simple, straight-forward approach not bogged down with theory, dynamic personality, and an acute political understanding based on harsh experience and observation.

On the 9th of August 1956, Lilian Ngoyi, alongside Rahima Moosa, Helen Joseph and Sophie Williams and 20 000 women, marched on the Union Buildings in Pretoria, bearing petitions to Prime Minister JG Strijdom against new laws requiring women to carry passes. This day, one of the largest political protests ever held in South Africa, is today celebrated as National Women’s Day.

Arrested in December 1956, Lilian Ngoyi stood trial until 1961 for high treason alongside 156 other leading anti-apartheid figures. While out on bail awaiting trial Lilian Ngoyi was imprisoned for five months during the State of Emergency declared after the Sharpeville Massacre in 1960. She spent most of this time in solitary confinement. After her acquittal in 1961 she enjoyed a brief period of relative freedom before being issued with banning orders in October 1962. These orders confined her to Orlando Township in Johannesburg and prohibited her from attending any gatherings. Arrested under the 90-Day Detention Act in the mid-1960s Lilian Ngoyi spent a further 71 days in solitary confinement.

Lilian Ngoyi was banned for a total of 18 years during which time she was all but confined to a small house, forbidden to move outside the boundaries of one small area and attend gatherings of any kind. Although battling to make a living from taking in sewing, she remained fearless and defiant, refusing to give up hope: “My spirits have not been dampened. I am looking forward to the day when my children will share in the wealth of our lovely South Africa”. Although the victim of both gender and racial discrimination, Lilian Ngoyi demonstrated that these restrictions could be transcended and that women’s rights and issues were central to the liberation struggle.

Lilian Masediba Ngoyi, affectionately known as Ma Ngoyi, died in Orlando of heart problems on the 13th of March 1980.