Sorry there was an error sending your form.
Giving to RU
Rhodes>Communications and Advancement>Alumni Relations>The OR Union>ORU Bursary Awards>2018 Winners 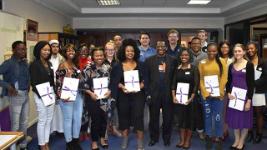 “As an organisation, The Old Rhodian Union has been around for about 108 years and we were founded by Sir George Corey and Professor Cullen Bowles as a way to open communication between current students and alumni,” explained Old Rhodian Union President, Professor Rod Walker at the award ceremony. “This has, through the years, evolved into a very strong fundraising organisation. This year, we are able to provide support to some 28 individuals, which is an increase from last year.”

Traditionally, the Old Rhodian Union has exclusively funded undergraduates, but thanks to alumni signing up for the MySchool card and designating Rhodes University as a beneficiary, the bursaries now extend to postgraduates as well.

“You must bear in mind that you have been afforded an opportunity to have a quality and life-changing education at Rhodes University. It is therefore important, where you can, to create opportunities for others as well,” Rhodes University Vice-Chancellor, Dr Sizwe Mabizela, addressed the winners.

He reminded the awardees about the many individuals in our country who are academically-capable, and through no fault of their own are not able to access the kind of education that has been afforded to the bursary winners.

The Chapman Bursaries are made possible by generous donations from Mr Mike Chapman in honour of his parents, Professor Hugh Chapman and his wife, Jean.

The Chris Hummel Bursary was created in honour of the old Rhodes University Professor, for his contribution to the history of Port Alfred and its environs.

The Williams Family Bursary is made possible by the Williams family’ annual donations.

The Old Rhodian Bursaries are made possible by donations from Old Rhodians worldwide.

The MySchool Bursaries come from money raised by Old Rhodians who have joined the MySchool programme.

If you wish to donate through the MySchool fund, you can apply for a card that allows you to swipe when buying items at certain stores. A percentage of the total buying amount is allocated to Rhodes University, at no extra cost to the cardholder. The University currently receiving approximately R1500 per month from this initiative. The link for the application form can be accessed here.