Christopher Leonard Vaughan, fondly known as Kit, graduated from Rhodes University with BSc (Hons) in Mathematics and Physics in 1976. His leadership capabilities were evident in his time at Rhodes where he held numerous positions of leadership both in sporting, residence and University structures. He went on to obtain his PhD in musculoskeletal biomechanics in Iowa and was awarded a DSc (Med) in biomedical engineering from UCT. Kit is Emeritus Professor of Biomedical Engineering at UCT as well as Extraordinary Professor in the Faculty of Health Sciences at Stellenbosch University.

He is a world authority in biomechanics of human locomotion and is also considered one of the pioneers of the medical device industry in South Africa. He is the Joint Founder and Chief Executive Officer of CapeRay Medical (Pty) Limited who are commercialising a new mammography system for detecting breast cancer.

This system – known as Aceso, the Greek goddess of healing – brings a dual modality approach to breast cancer screening, combining automated breast ultrasound and low dose digital x-rays, to provide complementary information on the composition of breast tissue. One in eight women will be diagnosed with breast cancer and each year 2.5 million new cases of breast cancer are diagnosed worldwide. However, with early detection breast cancer can be treated successfully and Vaughan’s contribution to saving lives will be invaluable.

Previously Kit made a substantial contribution to the study of biomechanics in children with spastic diplegic cerebral palsy. He previously served on the Council of UCT and currently serves as Non-Executive Director of Strait Access Technologies (Pty) Limited, a UCT spin out company that has developed innovative cardiac devices for treating patients with rheumatic heart disease.

Kit has an abundance of scientific publications but his areas of special focus include human gait, biomechanics, mathematical modelling, medical imaging and breast cancer. He has recently completed a book on the history of the academic rating system in South Africa entitled On the Shoulders of Oldenburg.

Kit has been awarded numerous awards including the Ernest Walton Fellowship from Science Foundation Ireland, a Research and Innovation Award from the National Science and Technology Forum and the UCT Book Award for Imagining the Elephant, his biography of Nobel Laureate Allan Cormack. In June of this year he was a joint first recipient of the Deputy Vice-Chancellor’s Award for Achievement in Innovation at UCT. From 2004 to 2014 Kit held an NRF A-rating.

Kit holds South African patents on a child car safety seat, a neck support system, an artificial ankle joint and an egg fertilization monitor. He also holds a US patent for a wrist brace to treat carpal tunnel syndrome and a UK patent on dual-modality imaging for breast cancer detection.

Kit is a passionate Old Rhodian (OR), has been married to fellow OR Joan Blair for 38 years, regularly attends functions and donates generously to the Annual Fund. He is awarded the Distinguished Old Rhodian Award for his dedication and investment towards the early detection of breast cancer and for his life-saving leadership and commitment to improving society. 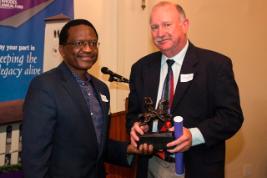