At the Drostdy Hall Leavers Dinner on Sat 03 October many students were honoured for their achievements throughout the year. These included academic, leadership, sporting, cultural as well as the Dean of Students Leadership award 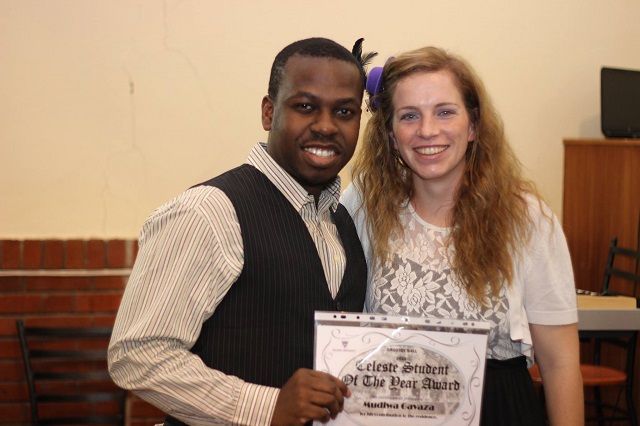 As there is no academic award for the postgrad students of Celeste House, there is the following award instead:Celeste House Student of the Year Award was presented to Mudiwa Gavaza for his contribution to the residence. 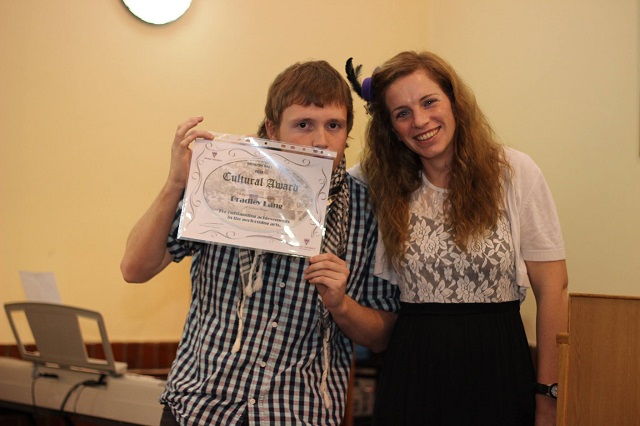 The Cultural Award was presented to Bradley Lang of Graham House for outstanding achievements in the performing arts. Brad is a member of the Nat Caf improv comedy group that performed at the National Arts Festival, and he also performed in “Character Door” at the Festival.  He is also a presenter of Lunch Bites on YouTube, which has accumulated many views.  He is also involved in many other Rhodes cultural activities. 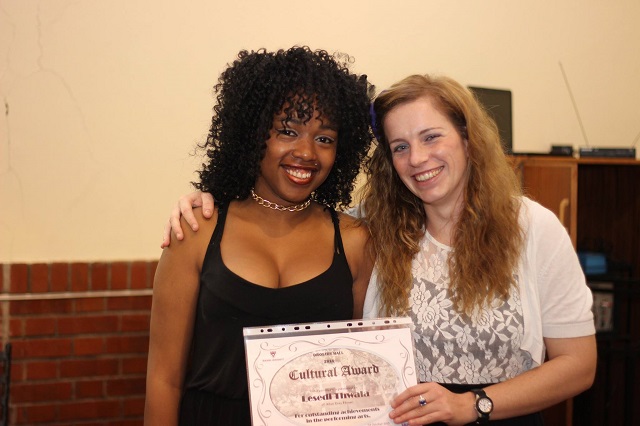 A second Cultural Award was presented to Lesedi Thwala of Allan Gray House for her overall achievements for rapping and poetry. Lesedi is passionate, dedicated and she would like to inspire and reach as many people as she can. 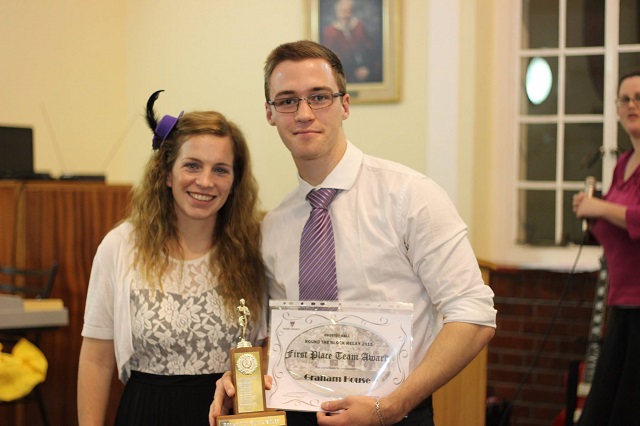 Dylan Bouchier, Graham House Sports Rep, received the Round the Block Trophy on behalf of Graham House for the first place team award.

The Dean of Students Leadership Trophy is awarded to Dylan Bouchier who has served Drostdy Hall selflessly in 2015. He has shown himself to be a truly dedicated and hardworking leader of the highest integrity.

He served on the Hall Committee as the SRC Hall Rep and the Hall Sports Rep. In both these roles he has proven to be reliable, trustworthy and determined.

i)   organised and successfully managed the creation of Inter-Res Sports T-shirts;
ii)  brought forward to the Drostdy Hall Committee the points-system for the Drostdy Inter-Res Sports Award (Internal) as well as the Overall Drostdy Sports Award (External);
iii) organised and successfully managed the smooth-running of Drostdy Round-the-Block;
iv)  official visits to Drostdy residence meetings to communicate SRC related matters;
v)   following up students’ concerns regarding the salt & sugar use in vegetables and the nutritional content of the health platter meal
vi)  following up on mould issues in residences, including the drawing up of a comprehensive proposal to point out student concerns to the Board of Residences.

Dylan’s efforts have not only had a positive impact on Drostdy Hall but the mould report led to a campus-wide assessment being undertaken to look into mould issues across campus.

Dylan is a true example of servant leadership and is a most deserving candidate for the Dean of Students Leadership Award. 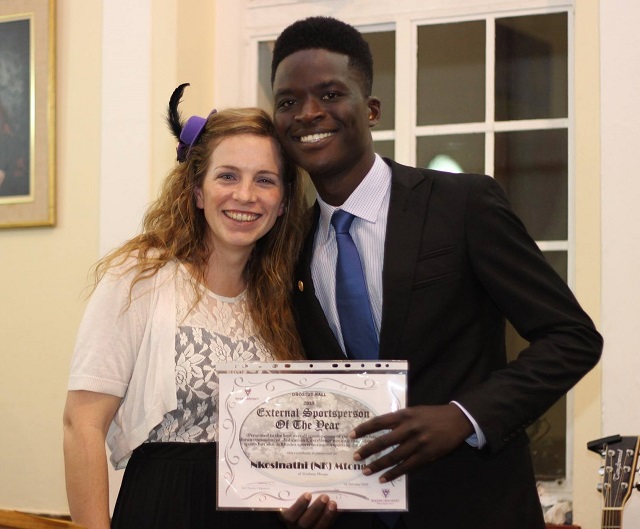 The External Sportsperson of the Year Award was presented to NK Mtonga of Graham House. This award is presented to the best overall sportsperson of the Hall who has shown commitment, dedication & excellence not only in residence sports but also in Rhodes sports in various sporting domains. NK plays first team Volleyball for Rhodes. 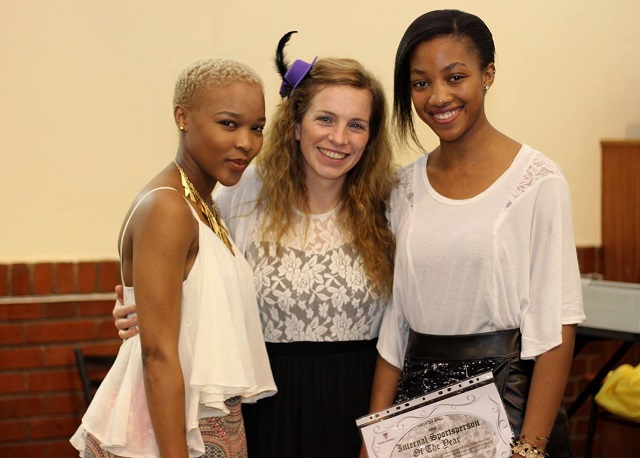 The Internal Sportsperson of the Year Award was presented to Amo Ramarothole of Allan Gray House and to Ofilwe Seleka of Prince Alfred House. This award is presented to the best overall sportsperson of the Hall who has shown commitment and dedication to inter-residence sports for their residence and who has obtained the highest points in the Hall’s inter-res points system. 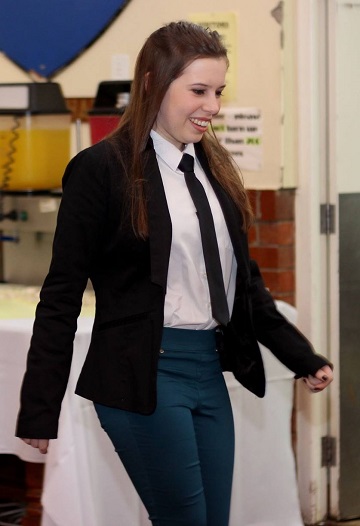 ‌The First Year Academic Award was presented to Ella Wilby of Allan Gray House, for achieving 90.50%. This award is presented to the first year student with the best overall academic performance from the mid-year examinations.

Ester Chanakira of Allan Gray House was awarded the Second Year Academic Award, for achieving 79%. Unfortunately she was not in attendance to receive her award. This award is presented to the second year student with the best overall academic performance from the previous November examinations and from the mid-year examinations. 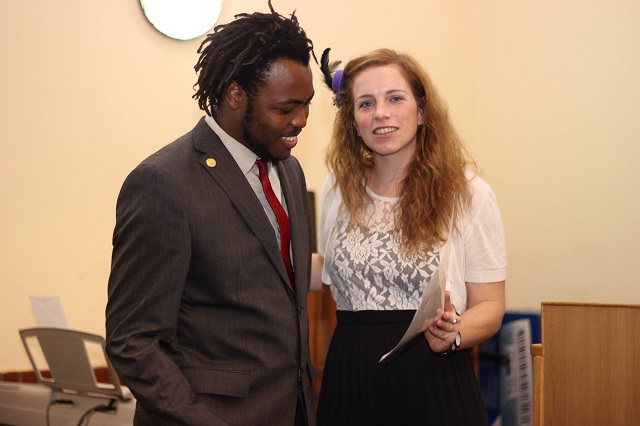 ‌The Third Year Academic Award was presented to Tumelo Mashaba of Graham House, for achieving 75%. This award is presented to the third year student with the best overall academic performance from the previous November examinations and from the mid-year examinations.