At the Drostdy Hall Leavers Dinner on Wed 04 October many students were honoured for their achievements throughout the year. These included academic, leadership, sporting, as well as the Dean of Students Leadership Award. 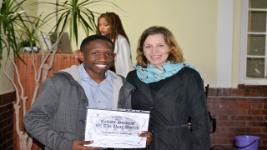 As there is no academic award for the postgrad students of Celeste House, there is the following award instead:  Celeste House Student of the Year Award was presented to Sakhumzi Mbilini for his contribution to the residence.

The students and house-committee of Celeste respond well to his leadership as Head Student. Sakhumzi is the most involved on the house committee and leads the house commitee very well. He is extremely reliable and always available to help with anything in the residence. He readily takes initiative when necessary and we will miss his contributions to Celeste. 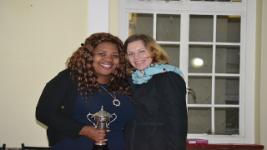 The Dean of Students Leadership Award was presented to Zilindile Ngcongo of Prince Alfred House.

Zilindile has been an outstanding sub-warden and committee member of Hall Comm. She has served as the Transformation Hall Rep. In this role she has attended all the training of the Equity and Institutional Office and ensures that any information she receives is passed onto the students in the Hall. She has organised guest speakers and movie nights about human rights violations and equity. She has a full timetable of awareness raising initiatives and has implemented her plan in the first semester swimmingly.

The focus in third term was on transformative environmental thinking particularly water-saving awareness. She has taken an active stance in spreading awareness about the water crisis by designing posters for the residences in the hall and encouraging students to do their part towards saving water. We have not seen many students doing this.

She has fulfilled all her duties beyond expectations and has set an exemplary standard for other students to emulate, she is an excellent role model and a leader worth following. Her academic results are outstanding and she is a mentor and counsellor to students in need of advice.

She arranged for inspirational messages to be placed under all the doors of women in Drostdy on National Women’s Day. A touching gesture. She also organised posters to go along with this in partnership with the Hall Senior Student.

This term, she focused on transforming academics and organised the ‘SAVE the SEMESTER’ Tea. Zilindile is a quiet leader who gets down and does the work without drawing attention to herself.

She takes part in all events enthusiastically and brings creative ideas that she sees through to Hall Committee. This is a rare trait to see among students who often raise concerns but do not contribute to meaningful change. She has set an example through her academics and her caring nature and counselling skills.

Zilindile qualifies and will be most deserving of the Dean of Students Leadership Award. Nadene has been part of the Rhodes University 1st Team Women’s soccer team from 2014 - present.   She has been the Captain this year, as well as the Rhodes Football Committee-Secretary.  She represented RU at University Sports South Africa - USSA tournament – July 2017.  She took on the Allan Gray House Sports Rep portfolio from the 2nd Term after their Sports Rep resigned, on top of her Sub-Warden duties.  She has participated in almost all the inter-res sporting events this year, and has been instrumental in Allan Gray House doing so well in the inter-res sporting competition this year.

The Cultural Award was presented to Yolanda Soji of Allan Gray House for outstanding achievements in the performing arts.

Productions she performed in this year:

‌The First Year Academic Award was presented to Adam Butler of Graham House, for achieving 85.25%. This award is presented to the first year student with the best overall academic performance from the mid-year examinations.

The Second Year Academic Award was presented to Alice Draper of Allan Gray House, for achieving 79%. This award is presented to the second year student with the best overall academic performance from the previous November examinations and from the mid-year examinations. 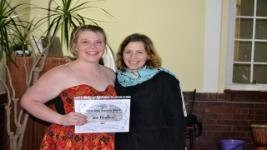 Amy Langston of Allan Gray House was awarded the Third Year Academic Award, for achieving 91%.  This award is presented to the third year student with the best overall academic performance from the previous November examinations and from the mid-year examinations. 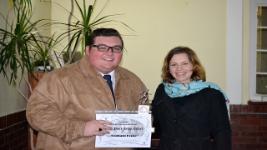 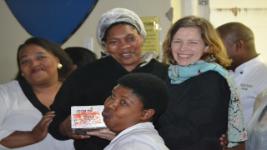 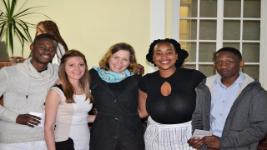 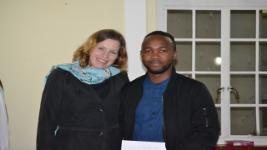